Alien SMG is a weapon in Saints Row IV.[1]

This gun, used by aliens for zapping, can also be used for zapping aliens. Handy!

The Xenoblaster is the only costume for the Alien SMG

Accuracy, Damage, Overheat Level and Recoil can all be upgraded 5 levels each, with a separate Too Hot to Handle "ultimate upgrade", which increases damage the more it overheats.[3]

The Alien SMG is an SMG that performs similar to the Rapid-Fire SMG. Its high fire rate makes this gun effective at close range encounters, which in turn makes longer range encounter more difficult. The fire rate makes ammo consumption an issue like the Rapid-Fire SMG, which can be an issue without ammo capacity upgraded or when dual wielded. This SMG has the advantages/disadvantaged of having no magazine and has very rapid cooldown times, as a forced cooldown is on par with the Heavy SMG and Rapid-Fire SMG in terms of upgraded reload times, which leaves the player less vulnerable during heavy combat.

Unfortunately, the key weakness of this weapon is that the Alien SMG has substantial view-kick, which makes keeping the players aim on target more challenging. Even though the Rapid-Fire SMG has a similar fire rate, it's noticeably more stable and easier to keep on target. 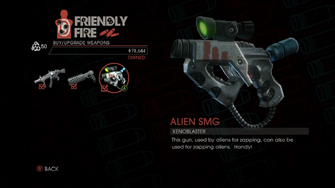 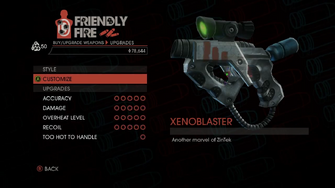 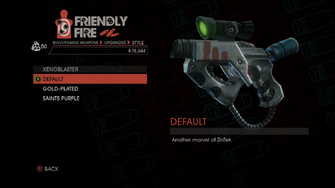 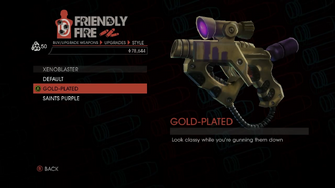 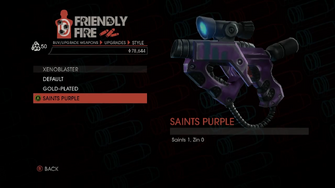 Retrieved from "https://saintsrow.fandom.com/wiki/Alien_SMG?oldid=339987"
Community content is available under CC-BY-SA unless otherwise noted.