Alien Rifle is a weapon in Saints Row IV.[8]

Fire three beams at once. More firepower, less aiming. What's not to love?

The Dominator is the only costume for the Alien Rifle.

Damage, Overheat Level and Rate of Fire can all be upgraded 5 levels each, with a separate Vampiric Ammo "ultimate upgrade".[10]

The Alien Rifle has good effective range and damage when upgraded, and does more damage than the Automatic Rifle and has better accuracy than the Burst Rifle. It's rate of fire is sluggish before it's upgraded, but after upgrades, it can deliver rapid rates of fire down range. The Alien Rifle has the advantages/disadvantages of having no magazine, and the manual cooldown works effectively at keeping the gun functional in combat.

The Alien Rifle fires in a three-shot burst, initially in a tight group, and spreading out in a triangular pattern if fired rapidly. This spread can be reduced by aiming, or negated by firing with a nominal delay between shots.

Like the Automatic Rifle, the Alien Rifle uses ammo rapidly and can make ammo consumption a issue if the Alien Rifle is relied on. It's lasers travel slower than bullet firing rifles, and firing multiple shots is mandatory like the Burst Rifle.

The Vampiric Ammo ultimate upgrade is excellent at keeping The Protagonist alive, as killing enemies results in Health being immediately restored. This upgrade is also excellent outside the Simulations, as the only other way of regaining health is to avoid taking any damage. On Hardcore difficulty, the Vampiric Ammo upgrade becomes a very powerful upgrade and makes the Alien Rifle an excellent general purpose weapon, dealing rapid amounts of damage while healing The Protagonist. 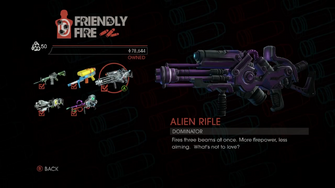 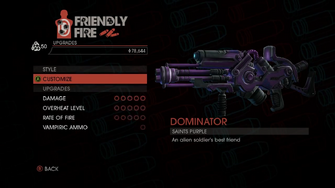 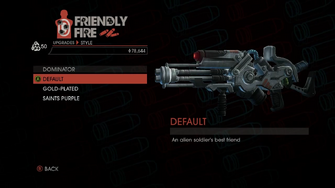 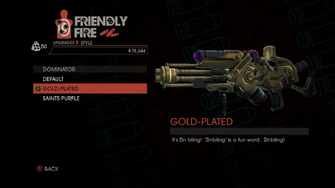 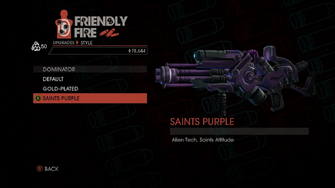 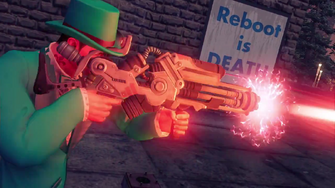 The Alien Rifle being fired in trailer 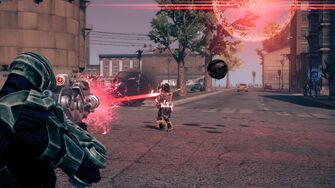 The Alien Rifle being fired in game

This article contains no references. See Help:Cite.
Retrieved from "https://saintsrow.fandom.com/wiki/Alien_Rifle?oldid=404331"
Community content is available under CC-BY-SA unless otherwise noted.