"Aisha's Favor" is the first mission of the Vice Kings story arc in Saints Row.

Some mother fucker's grabbed Aisha's sister right off the street. [...] Aisha said they were drivin' a yellow sedan. Tail those bitches back to wherever they go and get those girls back.

— Johnny Gat to Playa, after receiving a phone call from Aisha.

In the first mission of the Vice Kings story arc, Johnny Gat and Dex meet Playa at the church. Gat briefly scrutinizes Playa before introducing them to the Vice Kings and their leader Benjamin King. Before Gat can say anything more, Aisha phones him, revealing her sister has apparently been kidnapped by the Vice Kings straight off the street. Dex considers that this is not Benjamin King's modus operandi, to which Gat states that it could be Tanya Winters. Gat then instructs Playa to go and save Aisha's sister.[1]

Playa obliges and saves Aisha's sister as well as two other women.

While you were talking with Johnny Gat about the Vice Kings, Johnny got a call from Aisha, a personal friend of his. Aisha told Johnny that her sister had just been kidnapped by the Vice Kings. Ordered to go get her and any other girls with her, you followed the kidnapper to a warehouse and killed all the thugs there. Finding the girls locked up, you tracked down the Vice King with the key at the local strip club, Tee'N'Ay. After a brief fight, you were able to rescue the girls and bring them safely back to the Saint's church.

This mission is available any time after completing the 3rd Street Saints prologue mission "Reclamation". As the first mission in the Vice Kings story arc, it is an easy mission despite the wealth of objectives.

Get in any car and head towards the marked position. Anywhere within a block triggers the next objective.

Follow the yellow Capshaw, not straying too far behind or getting too close. Doing either triggers a 30 second timer to get to a safe distance.

The short drive leads through parts of both the Saint's Row District and the Red Light District, before ending outside a building, where a short cutscene plays.[4]

Take out any resistance, but do not harm the girls.

After fighting through a small group of Vice Kings, the girls reveal the key is held by a pimp at the nearby Tee'N'Ay.

If Tee'N'Ay is visited before talking to the girls, there is no-one there.[5]

This leads to a small gunfight against some more Vice Kings, and a pimp armed with an SKR-7 Spree.

The pimp drops the key after being killed.

Go back to the warehouse and release the girls.[8]

After returning to the building with the key, fight through a few more Vice Kings.

The two other girls are randomly generated.[9][10]

Take the girls back to the church.[11]

Drive back to the church. The girls can be dismissed and recruited, but abandoning them does not fail the mission.[12] If they are left too far behind, they may fall through the map and die.

Upon completion of the mission, the Saints take over the Bavogian Plaza neighborhood at the Red Light District.

Hey man, it's Gat...if you think clearin' out the Row was fun ,find me at the church... you're gonna love what I got planned for the Vice Kings...

Johnny Gat: "Take a seat, man."
Johnny Gat: "So you're Julius' new boy huh? You don't look like much. Then again, I don't look like I have an eight inch cock, so I guess we're both full of surprises."
Johnny Gat: "The Vice Kings are named after one guy: Benjamin King. That shit don't happen unless you're a professional or a bad ass, and in King's case, he's both."
Johnny Gat: "Hold up, I gotta take this. Aisha, what a pleasant fucking surprise. Whoa, slow down. Okay that's not slower, that's louder. Shit, where's she headed? Don't worry, I got this."
Dex: "What's up?"
Johnny Gat: "Some mother fucker's grabbed Aisha's sister right off the street."
Dex: "Shit man, that's the sixth girl this month. We know who's doing this?"
Johnny Gat: "Yeah, the Vice Kings."
Dex: "No way man, kidnapping ain't King's style."
Johnny Gat: "Maybe that slut Tanya is goin' behind King's back, don't know, don't fuckin' care."
Gat turn to Playa
Johnny Gat: "Aisha said they were drivin' a yellow sedan. Tail those bitches back to wherever they go and get those girls back."

Wait, hold up. If you're bringin' that much ass home, you better have a big ride.

The guy with the key went to Tee'N'Ay. 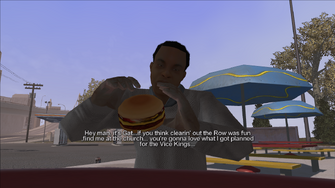 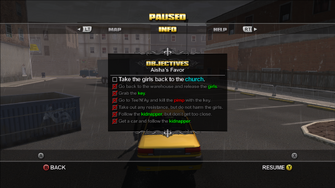 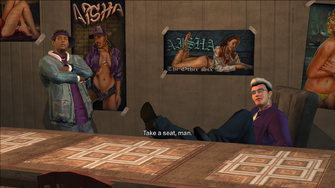 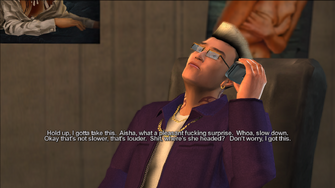 Aisha's Favor Gat on the phone with Aisha 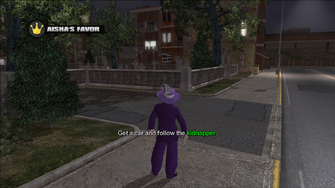 Aisha's Favor objective - Get a car 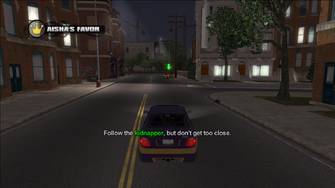 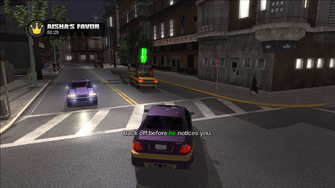 Aisha's Favor warning - Back off 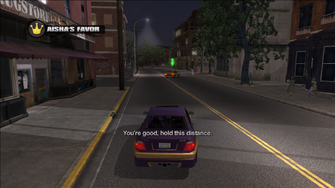 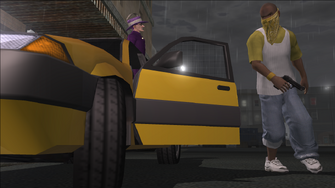 Aisha's Favor - kidnapper getting out of vehicle 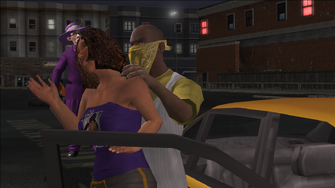 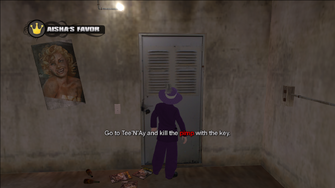 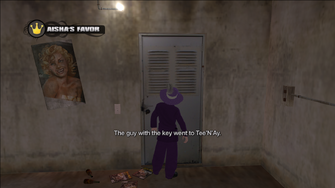 Aisha's Favor - The guy with the key went to Tee'N'Ay 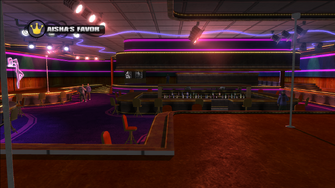 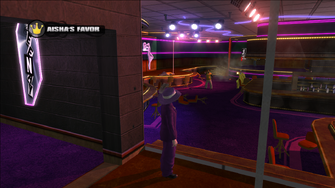 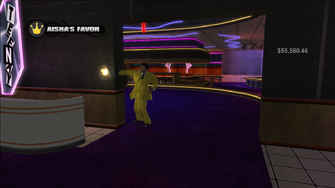 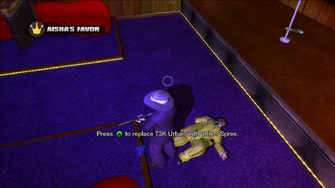 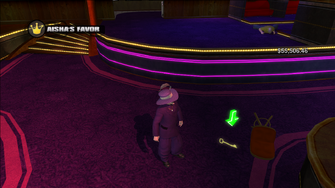 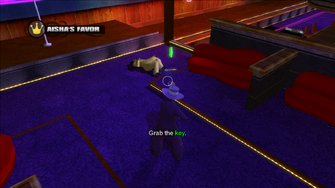 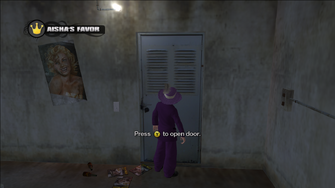 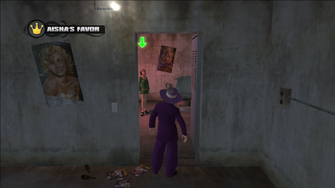 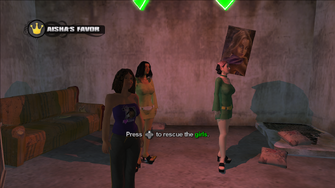 Aisha's Favor - Press up to rescue the girls 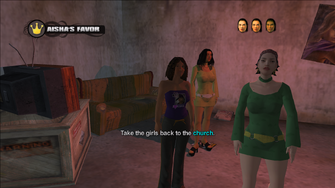 Aisha's Favor objective - Take the girls back to the church 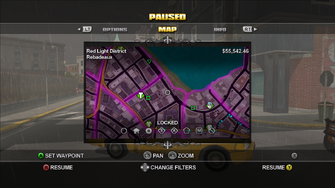 Aisha's Favor - girls spread over the map without failing 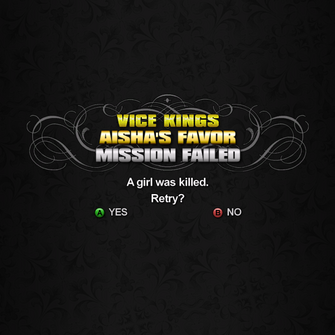 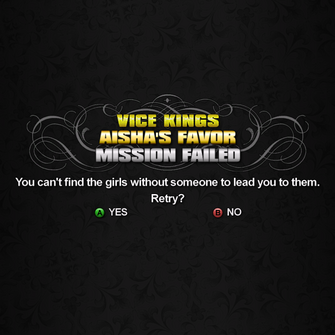 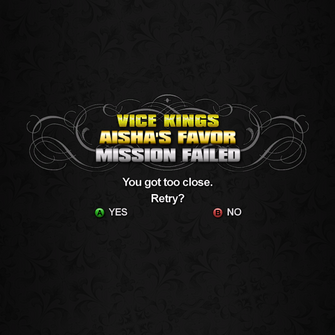 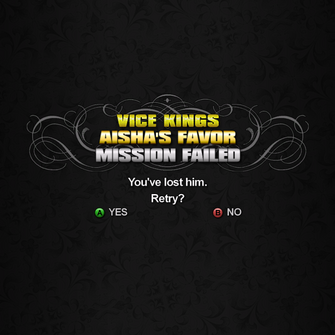 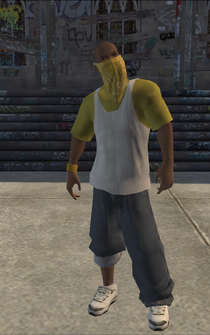 This article contains no references. See Help:Cite.
Retrieved from "https://saintsrow.fandom.com/wiki/Aisha%27s_Favor?oldid=422823"
Community content is available under CC-BY-SA unless otherwise noted.