Adult Swim WDDTCPDG is a Radio Station in Saints Row: The Third.[1]

It is hosted by "Jon", a person in the Witness protection program, and star of Adult Swim show "Delocated".[3]

Alright real quick I just wanna say something before we uh, get to our next song, um, I know you think I'm just uh, a mindless recording. Right? I'm programmed to repeat silly bits of patter while you drive around and murder people in this video game, right? Look, maybe that's true, maybe it's true but I gotta question. How independent are you? Turnin' the tables is what I'm doing here, beca- you think you have free will but really you're just doin' what the game tells you to do. How much control do you really have over your own life? I mean, think about it, this is what you do. Take a look man, you, you're si- you sit around all day playing a video game and listening to fake radio stations? What are you doing with your life? Don't you want to get a girlfriend and lear- maybe learn something new? Surprise us! Take a class! Get a skill so- We already know you can punch buttons and pull your pud! Come on, man!

Alright folks, um, just wanna share something here, uh... The other day... this is weird, I found a third nipple on my body, I, I, it's not weird, I just, I just discovered it, so you know... Most people who have third nipples have them on their chest, right next to their regular nipples and um, y'know I found mine... uh I found mine behind my knee, which I think is weird, right? You sp- you know, you spend your whole life thinking of yourself, you know, as uh, as having two nipples. You're, you know... I mean that's just... quote unquote normal then you find out you have a whole other nipple, and it's uh, it's...it's behind your knee. And it's, it's caused a, a little bit of a ripple effect, of insecurity, where now I'm questioning everything. Like what's real, what's true. And I know you know what? you're wondering if I used the word ripple because it rhymes with nipple and the answer is no, and that just occurred to me just now that I said that and that's why I said it. Anyway I gotta, I gotta nipple on my knee, uh and I just wanted to let everybody know.

Y'know I've had a lotta people ask what the call letters in WDDT CPDG the Swim stand for. Um, I wondered myself for a while. But then I looked up call letters, on Wikipedia and I found out they don't stand for anything. Call letters are, and I'm quoting here: "A unique designation for a transmitting station". So they're basically, random letters, for identifying broadcast stations. You know what? This is boring. I don't know why I'm talking about this. I'm very sorry. I guess uh, I guess I'm runnin' outta things to talk about. If I had to pick I would say they stand for... "Why Do Dogs Think Cats Psychologically Don't Get It." I added an I. Had to make it work.

— Jon, talking about the call letters in the radio station name.

Hey uh, Tom? Tom, can we get some food in here? I'm starving man... I know you're not a waiter, I'm just asking a question. I'm just uh... No, I don't think you're a waiter! That's, just stop, I that's not... that's... That's a long way to go to be sarcastic, Tom. Wow! Alright, um... for those of you listening Tom just put on a waiter apron and got out a pad and pen. As if he's gonna take my order. Alright, Tom, I get it... Let's just get back to the show... Alright, Tom's just staring at me, pen poised over pad. You're gonna make me uh, go through this little snarky food ordering thing, right? Alright, fine. Um... I will have the huevos rancheros. With a side of... chicken apple sausage. Uh... cappuccino and I'll take a check immediately because I'm in sort of a rush... I have to uh... I got to meet my friend Tom at the smartass convention downtown... No, I don't have another friend named Tom. I'm talking about you, Tom! Well, how am I supposed to know you were kidding? You're a... you're a very difficult person to work with Tom.

— Jon, arguing with Tom about food.

Oh hello! Hi! ... Oh sorry, uh, listeners I'm not talking you, uh this woman just walked by the studio and uh... she winked at me... God, she was hot, hey Tom... Tom who was that?... What do you mean "Who am I talking about?" The hot as hell woman who just walked by, you didn't see her? Oh man she, she was the kinda hot, where you get a boner even if she's standing behind you... The hairs on the back of your neck stands up, your bone stands up... You have a boner Tom? You see, there you go.

— Jon, talking to Tom about a woman.

Hey what's up, you're listening to my voice...*laughing* you thought I was gonna say WDDT CPDG the Swim, which would also have been correct, either one.

Alright, you are smack-dab in the middle of WDDT CPDG the swim's 12 songs that randomly repeat forever rock block.

Alright, hope you enjoyed that last song, um, I can't hear music myself. It's kind of a defect I've had since birth. Uh, so when people saying "oh that was a great song! The melody was so good!" and all that. I don't know what they're talkin' about. But I'll say this, I like the way *censored* looks.

Alright folks, we are gonna mix it up now, and take some listener calls. Uh this first call comes from uh... hold up... alright my sound engineer, Tom, is telling me we're not set up to take calls, I don't know, what, what is, what... what kinda radio show isn't set up to take calls? That doesn't make sense Tom... No you just get a phone and plug it into the thing, right?... Alright my producer's saying I'm oversimplifying it... Kay now he's saying I don't understand how audio technology works... Kay he's saying I also don't understand how dedicated phone lines work, alright Tom?... Relax, I get it, I'm not as knowledgeable as you, okay?... Alright now he's saying that no, I don't get it, I don't get anything... okay? Now he's pulling out a knife, and it looks like the knife from the movie, Cobra... Okay he's waving it at me, and slicing it across the tech booth glass... Whoa, now he's pulling up his shirt!... He is RIPPED, Jesus Tom!... Oh my god! He's... he's carving... runic symbols into his chest and... he's muttering these crazy, this pre-human way- OH MY GOD! HE JUST HURLED HIMSELF AGAINST THE GLASS! He shattered like a ceramic vase, this is NUTS! Holy shit! Alright folks, it is official, things are getting weird around here.

— Jon, during a chaotic series of events.

Alright, we are gonna take a quick break from the total mind blow you've been getting, to pay some bills! Our sponsor today is of course Nicky's Grinders, um, now as you know I'm a huge personal fan of this place, um, Nicky serves up hands down the best grinders in the city. Not only are they tasty, they provide the eater with a pure, all natural grinder high that can last, I would say minimum up to 12 hours, minimum. Lemme describe to you, what it's like to bite into one of these grinders, from Nicky's: your teeth penetrate the crust like miners, delving through delicious ore. And once through the top strata, they find themselves in a golden anti-chamber of horseradish, cheddar and Dijon. Like Odysseus in the land of the lotus eaters, they are in danger of tarrying too long, become entrapped by the pleasures they found. But if they press into the deeper layers, they discover a true awakening of flavor, in the form of a baked glazed honey ham, sliced thin, like spider hair, that's how thin. Your teeth undergo a transcendent enlightenment. Not unlike the apes in the beginning of 2001. They're inspired to erect, a new civilization inside the world of the grinder. A glorious cave kingdom, ruled justly, and with the largest of spirit. Unmatched by any civilization that has come before. So uh, good grinders is what I'm kinda getting at.

— Jon, describing a grinder from Nicky's

Alright, so uh, the network wants to get some brand recognition going out there uh, they want me to do a few of my classic catchphrases like uh, *fart noise* and uh, "what a crunchry!". Y'know "lacation" "meatsweet" and all that kinda stuff but uh, y'know frankly there's too many to do them all, I mean uh, let's face it folks, I'm a one liner machine. a linechine if you will. A catchphrapist. Anyway there's too many, is my point so uh, what I'm gonna do, is give 'em all to you in one all-encompassing breath. You heard it right, you're gonna get every one of my classic, pithcramed catchphrases, in one ultimate 'breve to end all 'breves. And that 'breve is... ready for it? Here it is...*fart noise* runchlacainwheat. You catch that? I'll give it to you one more time. *fart noise* runchlacainwheat. Boom. There it is. Super 'breve. Just take a few deep breathes, gotta calm down, process it. And do it. Go to the mirror. Go to your bathroom. Look at your mouth. Make it happen.

— Jon, combining all his catchphrases together.

Alright folks, we are gonna do a little call in contest right now. The first five listeners to call in, and accurately guess the length of the longest hair on my body will win two tickets, to see the Vaudeville Vaginas at the Metalarch Arena in Shortview, New Jersey on February 31st. Opening act that night is gonna be Grumpy Grandpa and the Guts and they'll be performing one of their classic murder stunts live on stage. Plus there's talk of a surprise appearance by Cybersaurus, who's gonna be crushing trucks, and givin' away free Chuck Cola via his retinue of supple virgin bondswomen. So uh, should be a pretty wild night. Let's get back to a song!

— Jon, on a calling contest.

You probably just creamed right now cause you recognized my voice from the hit reality show Delocated. It's okay, you can stop creaming now, but uh, y'know if you can't stop creaming you might wanna consider purchasing a pair of cream-resistant pants. I know what your thinkin'. "Cream-resistant pants don't exist, there little more than a off dreamt possibility, hovering somewhere in the distant future." Well uh, guess what? You're wrong, dude. I am as we speak in the process of developing a cutting edge line of pant, guaranteed, to reroute any cream safely from the crotch area, down the pant leg, into a small gutter in the cuff. If you would like to purchase the cream-resistant pant, I am accepting pre-orders at: www.Krousers.com/nomocream. Log on, make a purchase.

WDDT CPDG, the Swim, your one stop shop for all things uh, uuuuuuuhm... yeah I dunno just started to say that and then I didn't know what else, I didn't know how to finish it. 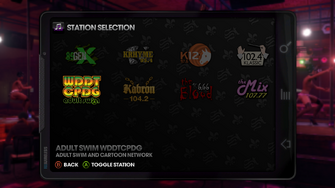 This article contains no references. See Help:Cite.
Retrieved from "https://saintsrow.fandom.com/wiki/Adult_Swim_WDDTCPDG?oldid=424207"
Community content is available under CC-BY-SA unless otherwise noted.