"A Remote Chance" is a mission in Saints Row: The Third.

The best? The best is beating Sway the Spider-God in a Tijuana Scaffold Match. The best is defending the world title 13 times in one night. The best is winning a last man standing match with two broken legs...Trust me little Icarus: you're flying too close to the sun.

— Killbane, threatening the Stilwater Butcher during a press conference outside 3 Count Casino.

Playa meets up with Shaundi, Pierce and Viola at the Broken Shillelagh to discuss the next step in taking down the Luchadores and Killbane. Viola soon suggests that the best move is to do to Killbane what he did to Angel: they take his mask, hurting his reputation. Knowing that Killbane would never agree to a fight against Angel, they decide to kill off the contestants of the upcoming Murderbrawl XXXI event so that Killbane is forced to fight Playa.

From an Oppressor helicopter, Angel and Playa take out the four Luchador wrestlers, using Kinzie's RC Possessor to destroy the wrestlers' reputations and make the murders look like accidents and destroy their reputation in the progress.

After killing the four wrestlers – Mad Mangler Merle Roberts, Christopher "The Clubber" Johnson, Trashcan Teddy, and El Presidente – Playa publicly meets Killbane outside 3 Count Casino and challenges him to "quit being a bitch and put [his] mask up", to which Killbane proudly obliges.

Aboard an Side Shooter, Angel flies to each of the four wrestlers, as the Playa sits in the back with the RC Possessor.

Go to the Broken Shillelagh

Playa calls Viola and tells her to go to the Broken Shillelagh with Shaundi and Pierce.

Go to the gym

After the cutscene, Playa is in a Side Shooter with Angel flying towards the Murderbrawl Arena in Yearwood.

If the Helicopter is destroyed at any point, the mission fails with the message "Helicopter Destroyed!".[1]

The first wrestler is Mad Mangler Merle Roberts, who is walking to his Bulldog.

There is a 45 second timer to complete this objective. If the vehicle is not controlled before the Luchadores drive away, the mission fails with the message "You waited too long to RC the vehicle!".

Once the Luchadores begin to enter the vehicle, it is not possible to RC it until they have finished entering.

Wait for wrestler to enter car

After taking over his vehicle, run over fifteen pedestrians. There are many mascots nearby.

If the Bulldog is destroyed before completing this objective, the mission fails with the message "Not enough pedestrians killed!".[2]

If the Bulldog is driven out of range, the mission fails with the message "Signal Lost!".[3]

Get to gas station

There is a Thunder Pump Gas Station a few blocks to the east. This objective is skipped if already nearby.

The Bulldog can be destroyed at this point skip the next objective, but submerging it in water fails the mission with the message "Signal Lost!".

After the killing spree, drive it into the fuel pump of the nearest gas station to end Roberts with an explosion.

Go to the harbor

The second wrestler is Christopher "The Clubber" Johnson, who is having a party on the beach. Angel flies the Side Shooter to a location between Sierra Point and Magarac Island, where there are 3 Piracy variant Miamis parked.

Take control of one of three Miamis, it does not matter which. Angel will follow the boat where-ever it goes, so it is impossible to go out of range.

If the first boat is destroyed, or grounded, the mission fails with the message "You Missed the Party".

Steer it into the beach party, whereupon it blows up. The blue target is over Christopher "The Clubber" Johnson, dressed in normal Luchador attire. Nearby there are several Status Quo

Checkpoint
Go to the helicopter

The third wrestler is Trashcan Teddy, who is on a sky-tour of the city. Angel flies the Side Shooter

Use the RC Possessor to take control of an unrelated helicopter, a Thompson.

Crash it into the wrestler's helicopter, destroying them both.

Trashcan Teddy's helicopter follows a fixed circular path, and will fly straight into the RC helicopter if it is in the way.

If the Thompson is destroyed without crashing it into Trashcan Teddy, the mission fails with the message "Decoy Helicopter Destroyed!".[4]

If the Thompson is flown out of range, or submerged, the mission fails with the message "Signal Lost!".

Checkpoint
Get to the airport

The last wrestler, El Presidente, is at Wesley Cutter Intl airport under protection of STAG.

There are 7 STAG Crusaders parked at the airport. El Presidente is driving in a loop in his own STAG Crusader.

It is not possible to control El Presidente's tank.

If all 7 tanks are destroyed, the mission fails with the message "All STAG Tanks Destroyed!".

Once El Presidente is dead, the mission ends.

Jane Valderamma: "Murderbrawl XXXI could have a disappointingly thin slate after a series of accidents claimed the lives of several top competitors. Murderbrawl opponents have already seized on these accidents to question the long-term health effects of the sport, claiming that undiagnosed brain injuries, combined with the performance-enhancing drugs, caused the competitors to fall asleep at the wheel. As is always the case with this exhibition, the additional controversy only raises the anticipation for the next event. While there may be fewer matches, Murderbrawl XXXI will still feature the highly-anticipated fight between Steelport's own Killbane and The Stilwater Butcher. This is Jane Valderamma with the Steelport Sports Entertainment News."

Playa - Male 1: "We're waiting too long to go after Killbane."
Viola DeWynter: "I was thinking the same thing. Come to the Broken Shillelagh. We can all talk there."

Playa: "Alright, I am done fucking around, I want Killbane."
Viola: "You wanna hurt Killbane, you gotta hurt his reputation."
Shaundi: "So, what, humiliate him?"
Playa: "Can't we just kill the bastard?"
Viola: "Take Killbane's mask and all that's left is Eddie Pryor. It's worse than killing him."
Playa: "This is more Angel's thing."
Viola: "Killbane would never agree to fight Angel."
Playa: "He's more scared of Angel than me?"
Shaundi: "No offense, but you're kinda ridiculous."
Pierce: "Relax--you gonna look hot in a Speedo."

Kinzie: "Pull the vehicle back before it's out of range of your controller."
Kinzie: "That's getting too far to control."
Kinzie: "The range is limited on that remote."
Kinzie: "You'll lose control if you don't slow it down."
Kinzie: "You're gonna lose the signal."


— Any time the RC vehicle is getting too far away


— When the RC vehicle goes out of range or is destroyed

Breaking News. Minutes ago, Mad Mangler Merle Roberts, a Luchador slated to compete in the upcoming Murderbrawl 31, ran over several pedestrians in what witnesses say was a rage induced vehicular massacre. His body is being pulled out of the fiery wreckage as his career ended... at a dead end. This is Jane Valderamma with a breaking news report.

Boater: "Great, this boat's defective! I want my money back."
Boater: "They promised boating was safe!"

More breaking news. Blood has chummed the water of Steelport as two boats lost control within minutes of each other, resulting in the deaths of the drivers, other boaters, and party-goers on a nearby pier. Is this a boating stunt gone horribly wrong... or is Death smothing[sic] out a wrinkle in his deisgn[sic] . This is Jane Valderamma with a breaking news report.

Boater: "Why isn't this thing turning off?"
Boater: "Who the hell's driving the boat?"

This just in. It was shades of the great bootlegger recall of aught 7, as yet another mechanical failure resulted in a fatal mid-air helicopter crash. Citizens of Steelport, a word of advice: pull over now. This is Jane Valderamma with a breaking news report.

Killbane: "Ladies and gentlemen...the Stilwater Butcher has graced us with their presence."
Playa: "You wanna fight the best, you fight me."
Killbane: "The best? The best is beating Sway the Spider-God in a Tijuana Scaffold Match. The best is defending the world title 13 times in one night. The best is winning a last man standing match with two broken legs...Trust me little Icarus: you're flying too close to the sun."
Playa: "Oh my God, quit being a bitch and put your mask up."
Killbane: "If you wanna be broken by The Walking Apocalypse I will gladly oblige you." 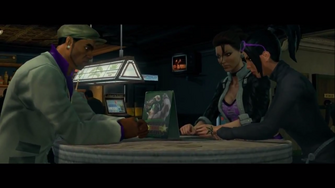 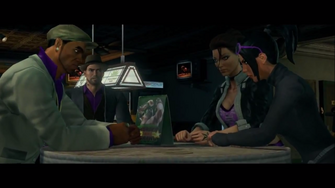 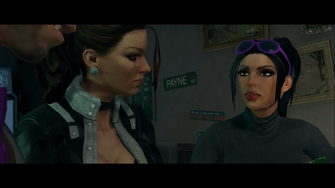 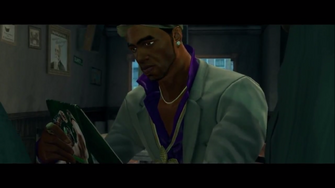 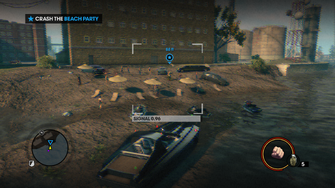 Christopher "The Clubber Johnson" on the beach 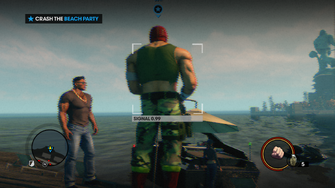 Christopher "The Clubber Johnson" from behind 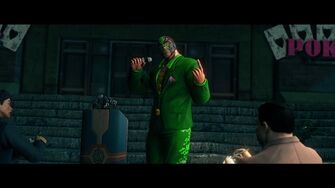 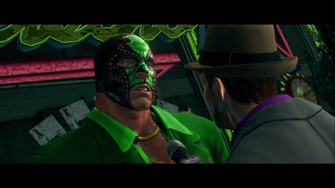 Killbane agrees to fight Playa, known as the Stilwater Butcher, and puts up his mask 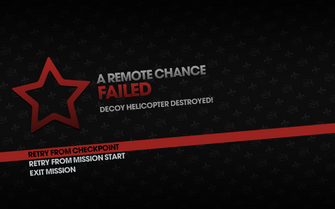 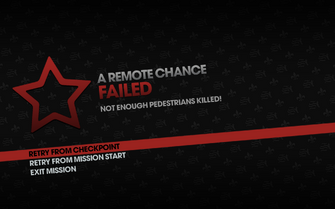 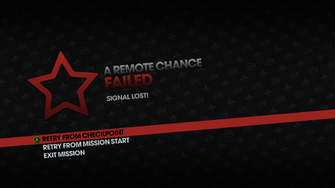 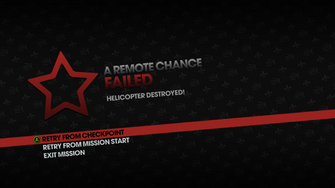 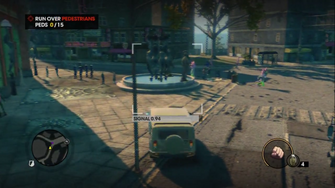 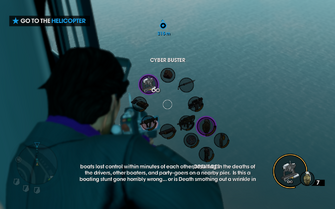 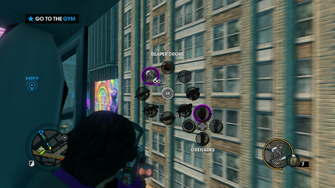 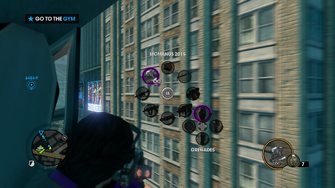 This article contains no references. See Help:Cite.
Retrieved from "https://saintsrow.fandom.com/wiki/A_Remote_Chance?oldid=420756"
Community content is available under CC-BY-SA unless otherwise noted.