The AS3 Ultimax is a weapon in Saints Row: The Third.[1]

The standard law enforcement shotgun. Duck if you see one coming...

The AS3 Ultimax is a mass-production model combat shotgun that is the successor to the XS-2 Ultimax from Saints Row 2. It is the standard-issue shotgun of law enforcement and national guard units in Steelport. It boasts a mounted combat flashlight, which can be helpful in dark environments. It is very likely to be the first shotgun acquired, becoming available soon after arriving in Steelport. Specifically, some SNG troops in We're Going to Need Guns carry AS3 Ultimaxes. It's also available at Friendly Fire.

By default, the AS3 is an uncompromising pump-action shotgun, offering good punch at a reasonable fire rate and making it extremely potent in-close. Upgrades dramatically kick up its firepower, accuracy, magazine size, and most importantly, its rate of fire, becoming a fully-automatic shotgun when fully upgraded.

As a contrast to the Grave Digger and S3X Hammer, the AS3 Ultimax boasts the highest fire rate, longest range, and tightest cone of fire of the three shotguns, giving it the best overall range. It does the least damage of the three, trading brute force for fire rate and magazine size. While a powerful force, the Ultimax tends to go through ammo quicker than the other two shotguns, so bear this in mind. 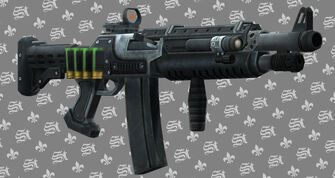 A fully ugraded AS3 Ultimax 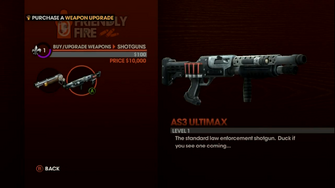 AS3 Ultimax in Friendly Fire during We're Going to Need Guns 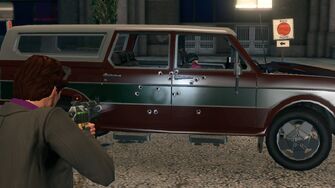 Lv 4 AS3 Ultimax firing a buckshot of 15 pellets 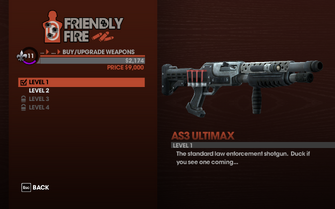 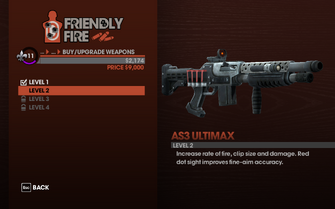 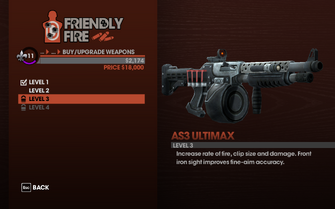 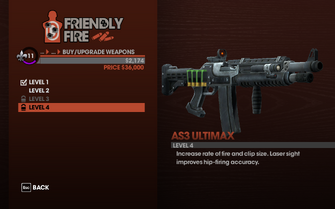 This article contains no references. See Help:Cite.
Retrieved from "https://saintsrow.fandom.com/wiki/AS3_Ultimax?oldid=404043"
Community content is available under CC-BY-SA unless otherwise noted.