"...To Kingdom Come" is the second mission of the Vice Kings story arc in Saints Row.

Check it out: Eesh has a recording session in a few minutes. That's when we make her disappear and give the Vice Kings a nice "fuck you" while we're at it. I want you to take Aisha to her session, but on the way stop at the chop shop to have your ride loaded up with some C4. Park the car at the studio and get the hell outta there. Eesh, make sure someone sees you before you jump out.

— Johnny Gat to Playa and Aisha, while at the church.

Playa meets with Johnny Gat and Aisha, who are having an argument at the church; Gat is angry at Aisha for leaving the Row and signing with the Vice Kings' record label, Kingdom Come Records, in her pursuit for stardom. However, Aisha has returned to request for Gat's help: she wants to leave the label as they are extorting her. Gat and Aisha plan to fake her death by bombing Kingdom Come Records while everyone believes she is inside, thereby allowing Gat to damage the Vice Kings and help out an old friend.[1]

Playa loads up Aisha's Zomkah with C4 explosives and, after dealing with an obsessive fan, drives her to Kingdom Come Records. After checking in with the receptionist, she quickly exits out the back of the building just before the car bomb detonates, destroying the building and killing everyone inside.[2][3]

Johnny wanted you to help out Aisha, Stilwater's famous hip hop artist, who was signed with Kingdom Come Records, a company owned by the Vice Kings. In order to get Aisha out of her contract, you helped her fake her death by rigging her car to explode and causing an explosion at the recording studio. Everything went smoothly, despite the fact that an over-eager stalker needed to be taken care of along the way.

Get into Aisha's car.

Drive to the garage.

Drive to Samson's garage. The route is marked on the map.

Samson says the explosives in the vehicle are not stable, and heavy collisions and gunshots will set them off once the bar empties.

An obsessive fan begins following, Aisha says he has stalking for a while.

The fastest course of action is to quickly exit the Zomkah so the fan shoots Playa and not the vehicle, and kill the fan by shooting him. He can take a fair amount of damage, but eventually dies.

He can also be easily lost by weaving around traffic or buildings. If he loses sight of Aisha, he does not immediately despawn, and can be located, and which point he gets out of his Anchor and runs away.

There is no specific mission failure related to the stalker, but he can easily set of the Car Bomb and destroy the Zomkah.

You need to lose the stalker before you can drop off Aisha.

This objective is only triggered by entering the marker at Kingdom Come Records while the stalker is still following.

He's gone, now get to the studio.

Once he is no longer persuing, simply drive to the building. There is generous timer which grants an absurdly large amount of time to get to the destination.

On the way, a Peterliner and two Five-Os are blocking the way across the nearest bridge. Either drive to the next bridge to get across, or slowly wedge the car between the vehicles and barriers, and then drive across the bridge. No other obstacles present themselves, but be wary of crashing.

Upon completion of the mission, the Saints take over the Union Square neighborhood in the Downtown District.

The mission can be failed by getting smoked or busted, abandoning/killing Aisha,[4][5] destroying her vehicle,[6] or failing to reach the studio in time.[7]

Jack Armstrong: "Jack Armstrong in the newsroom. Er, we are just receiving word of a disaster at... one moment... the location is just coming into us, what do we have? ... It is the Kingdom Come Records building downtown... Apparently some sort of massive explosion has occurred... I'm sorry, what's that? ... We have fire and rescue, they're on their way. We do not have many details at this time, but we do know that the force of the explosion was immense as the building was leveled. We are following this story closely here in the newsroom - we will bring you details as they occur. I'm Jack Armstrong."

Aisha: "God, you haven't changed at all, have you?"
Johnny Gat: "Not all of us have a couple million dollars to make changes."
Aisha: "It's always the same shit with you."
Johnny Gat: "Oh, here we go again."
Aisha: "What did you want me to do? Did you expect me not to take my shot?"
Johnny Gat: "No, I expected you to remember where you came from."
Aisha: "Oh, fuck you Johnny."
Johnny Gat: "Fuck me? Fuck you! You're the one who ran off to be famous. The only time you remember who we are is when you want something."
Aisha: "My sister was kidnapped!"
Johnny Gat: "And I brought her back didn't I?"
Aisha: "No, he did."
Johnny Gat: "Bullshit, I told him to do it. No offense."
Aisha: "Look, if you're gonna help me, help me, but don't you dare try to hold it over me."
Johnny Gat: "Fine."
Aisha: "Fine."
Johnny Gat: "Fine."
Johnny Gat: "Relax man; I'd like you to meet Saint's Row's claim to fame. This... is Aisha. And tonight we're gonna kill her."
Aisha: "He's being melodramatic. See, I'm signed with Kingdom Come Records."
Johnny Gat: "And it's no secret that the label is owned by the Vice Kings."
Aisha: "But the real deal is that once you're in you can't get out. They rip you off left and right, and they extort you to stay signed. I've talked to Johnny and he said that you might be willing to help me."
Johnny Gat: "Check it out: Eesh has a recording session in a few minutes. That's when we make her disappear and give the Vice Kings a nice "fuck you" while we're at it. I want you to take Aisha to her session, but on the way stop at the chop shop to have your ride loaded up with some C4. Park the car at the studio and get the hell outta there. Eesh, make sure someone sees you before you jump out."
Aisha: "Johnny, I really appreciate--"
Johnny Gat: "Whatever, I was gonna blow that place up anyway."

Aisha: "Are you new? I don't remember you hanging around the Row."
Aisha: "So does Johnny talk about me at all?"
Aisha: "None of this would have happened if I didn't sign on with Warren."
Aisha: "Thanks for getting me out of this."
Aisha: "I never should've gotten mixed up with the Vice Kings."
Aisha: "So uh, you don't talk much do you?"
Aisha: "Hey hey hey, slow down, we don't want to hit anything."
Aisha: "We're not gonna make it. Why did I let Johnny talk me into this?"
Aisha: "Right on time."

Alright man, you ain't got a lot of time, so hurry. One more thing. That shit in your car ain't exactly stable. I wouldn't hit anything if I were you

— Samson, after going to his garage.

Stalker: "Hey you stay away from my girl!"
Stalker: "She's mine, you understand me!"
Stalker: "Aisha, I need you!"

Stalker: "It can't end like this, we were meant to be together..."
Aisha: "I guess I don't need that restraining order anymore."

— After Playa gets out of the car

— After running someone over

— Upon arriving at the studio 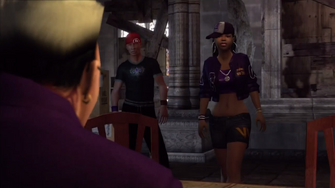 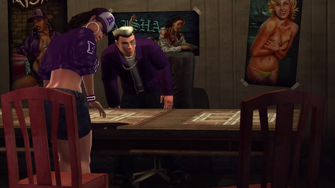 Aisha and Johnny Gat usher Playa to come over 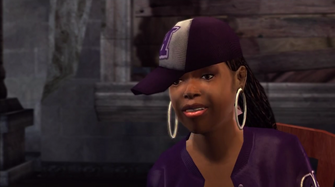 Aisha meets Playa and thanks Johnny Gat for his help 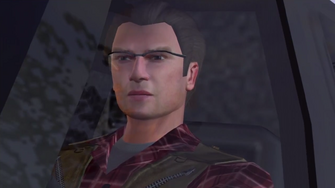 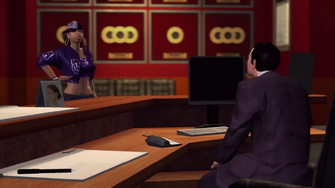 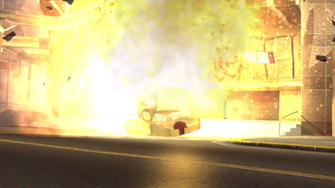 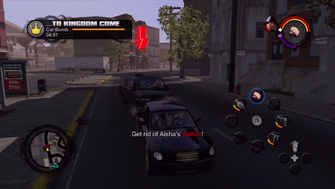 To Kingdom Come - Get rid of Aisha's stalker objective 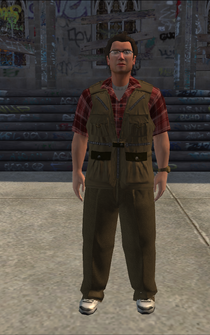 This article contains no references. See Help:Cite.
Retrieved from "https://saintsrow.fandom.com/wiki/...To_Kingdom_Come?oldid=422867"
Community content is available under CC-BY-SA unless otherwise noted.