'Merica is a weapon in the Commander-in-Chief Pack DLC for Saints Row IV.

The 'Merica weapon is part of the Commander-in-Chief pack, which, until 2013-10-01, was only available by pre-ordering the game. It uses an animation set similar to the Incinerator and Mini-Gun from Saints Row: The Third, but without the slow walking speed.

The weapon consists of the following weapons:

All small arms weapons and the minigun are constantly firing when the trigger is held, and the Reload button alternates between the secondary firing weapon, which is either the rocket launcher or flamethrower - with the selected weapon rotating to the top of the weapon. The weapon is very powerful, able to take out the normal Zin with one trigger pull containing unmeasurable amounts of freedom.

A fully upgraded 'Merica is capable of taking out even unshielded Wardens in a matter of seconds.

The weapon is loaded entirely with tracer ammunition with 'Hollywood' high-flash gunpowder, producing truly spectacular displays whenever it is fired. In addition, every tenth round or so produces a distinctive fireworks noise. At close range the enormous muzzle flash, wild, scattering, tracers and exploding rockets (if that mode is selected) reduces, targets will see nothing but blinding light. As for the wielder: a lot of corpses and destruction in the weapon's awe of fire.

Despite its insane amount of firepower, at your disposal. The 'Merica is not strong enough to take on heavy armor, even if it has a rocket launcher taped to it and with so many weapons firing at once, it will take more than a steady hand to control this much freedom in the form of muzzle climb. 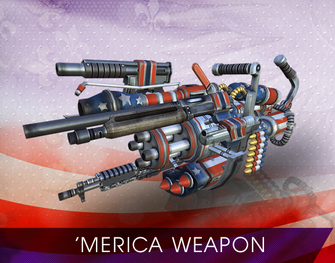 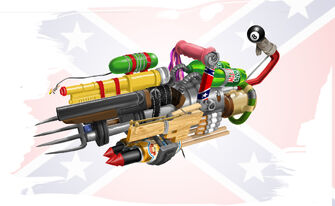 Concept art for unused Hillbilly skin for the 'Merica weapon 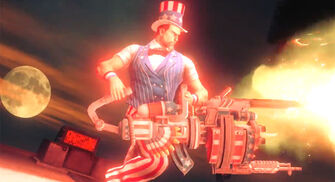 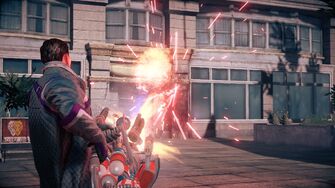 The 'Merica gun firing with the flamethrower selected 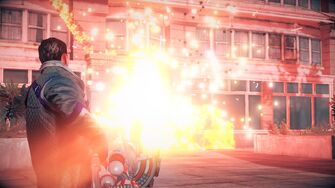 The 'Merica gun firing with the rocket launcher selected

This article contains no references. See Help:Cite.
Retrieved from "https://saintsrow.fandom.com/wiki/%27Merica?oldid=418059"
Community content is available under CC-BY-SA unless otherwise noted.