Oleg Kirrlov[4] is a character in Saints Row: The Third and Saints Row IV.

Oleg is a former KGB agent.[5] Standing around 8 feet tall and extremely muscular, he is not only physically strong but also very intelligent.

He was held captive for several years by The Syndicate, who sought to make use of his immense strength and knowledge.[6] From a top-secret cloning facility at the Syndicate Tower, they used him as a master pattern to create the brutes. The clones produced are super-strong, but they lack the intelligence of Oleg. After being rescued, Oleg helps Playa, Pierce, and Shaundi locate and kill Phillipe Loren.[6] After this, he joins the Saints, helping them in various missions and as a homie. Over the course of the Saints occupation of Steelport, Oleg and Pierce play chess several times. The games are never culminate in a winner because something always disturbs the board. The first time[7] Playa kicks the table, then Oleg drops a bag on the game[8] and finally a VTOL crashes into the penthouse.[9]

When Playa becomes President, Oleg becomes his head of security. As Playa walks towards the press conference, Oleg kicks an obsessed fan to the ground.[10] When the Zin invade Earth, he and Josh Birk escape invasion. Later, as they share a drink at the Broken Shillelagh,[11] Kinzie attempts to call Oleg to mount a counterattack against the Zin, but he dismisses her call as a telemarketer because he does not recognize the number. He and Josh are both killed when Zinyak blows up the Earth.[12]

Oleg appears in the final storybook of the game, he is in the picture playing volleyball along with Gat, Kinzie, Lin, Josh, and Dane.[13]

I am always a gentleman.

Once more into the breach, dear friends.

— Oleg when riding in a car, a quote from Henry V.

— Oleg quoting Julius Caesar when being injured by Playa.

As Shakespeare wrote, 'Brevity is the soul of wit.'

I have not yet begun to fight.

— When Playa kills an enemy.

You fight with the strength of Achilles!

— When Playa kills an enemy.

— When called for assistance.


— Oleg grappling with a Brute during Return to Steelport

Oleg: "Were Kinzie here, I'd pour out my heart."
Pierce: "WHAT?"
Oleg: "It's rare I find an intellectual equal."


— While fighting at the Guard Armory during Three Way

Interviewer: "Rumor has it you and the Mayor of Steelport have known each other for years?"
Oleg: "Oh and how would that be?"
Interviewer: "Well, we know that you were in the KGB during-"
Oleg: "THIS INTERVIEW IS OVER."

Burt: "Oleg Kirrlov."
Oleg: "I should kill you where you stand, Reynolds."
Burt: "The Cold War is over, son."
Oleg: "Do you think I'm naïve enough to believe that?"
Burt: "Ha, guess not."
Oleg: "I owe a debt to the Saints, but when this is all over, you and I will settle what we started in Moscow."
Burt: "Anytime, you commie."

Josh: "A soldier of the working man, huh? I know what you're going through."
Oleg: "Do you?"
Josh: "I played Torvald in A Doll's House when I was nine."
Oleg: "Never talk to me again."

Kinzie: "KGB, right?"
Oleg: "Is it that obvious?"
Kinzie: "You're a giant Russian Superman. You don't have a whole lot of options, unless you're really Rasputin."
Oleg: "I think I like you, mousey-one."

Shaundi: "So, what did you do before you were a glorified pin cushion?"
Oleg: "I worked for the Russian government."
Shaundi: "What did you do for them?"
Oleg: "Whatever my country needed of me."
Shaundi: "That's... very vague... and really unnerving."

Zimos: "Hey big man, I have a question."
Oleg: "What?"
Zimos: "I know a lot of lonely ladies who would love a chance to spend the night with a man of your talent."
Oleg: "I'm not one of your whores, old man."
Zimos: "No, you're a civil servant giving poor widows a chance to feel what it's like to be with a real man for the first time in their cold lives."
Oleg: "Hmmm, I will consider." 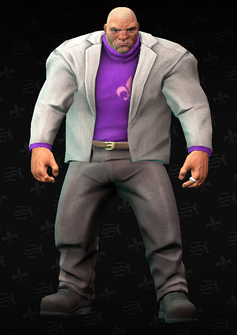 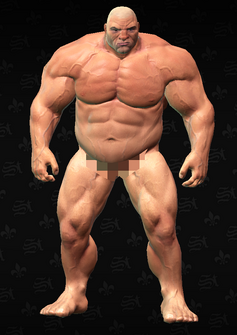 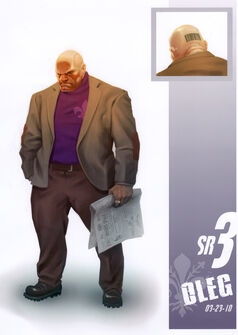 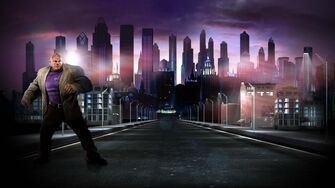 Oleg in a promo image for Saints Row: The Third 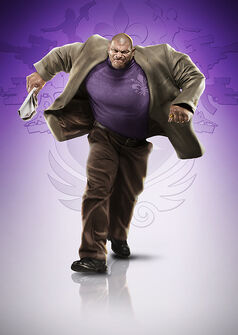 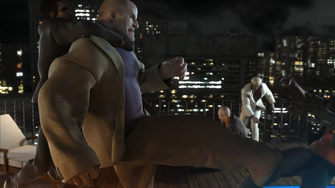 Oleg in the Saints Row The Third Power CG trailer 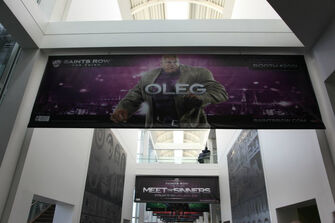 Oleg in a promo poster for Saints Row: The Third 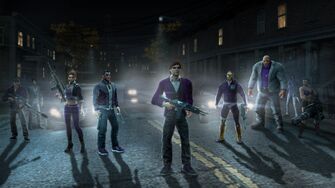 Oleg in a promo image for Saints Row: The Third

Playa with Oleg and Kinzie 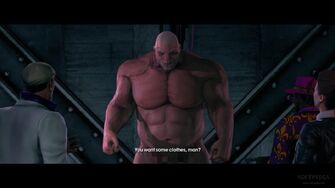 Oleg meets the saints for the first time 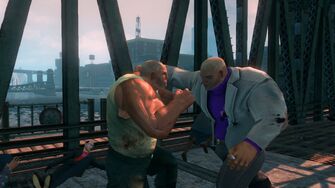 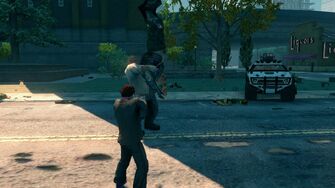 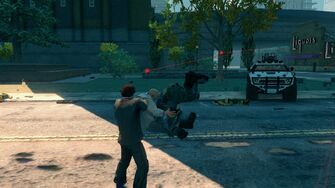 ...then makes the transition into the Piledriver, killing the Brute 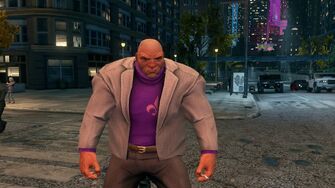 Oleg Kirrlov as a Homie 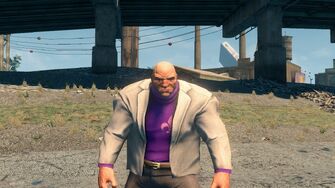 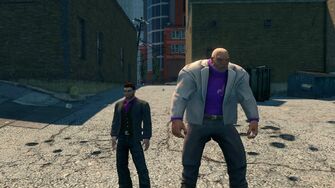 Size difference between Oleg and Playa 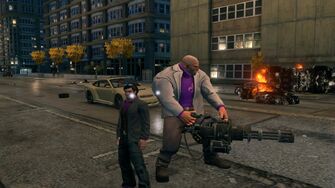 Oleg with a Mini-Gun 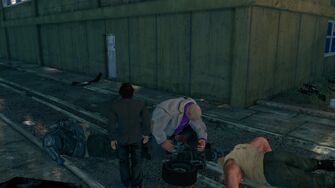 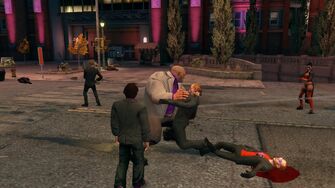 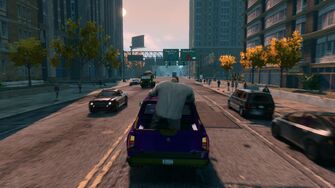 Oleg can only ride in the back of a Criminal 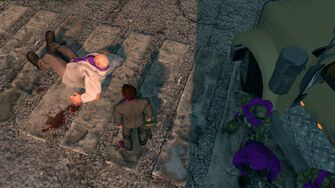 Oleg getting up after being knocked down 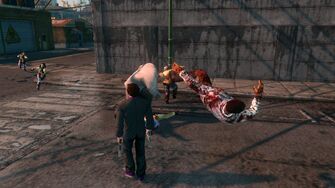 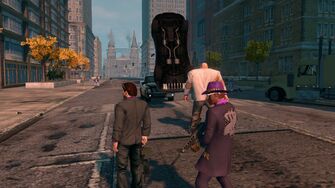 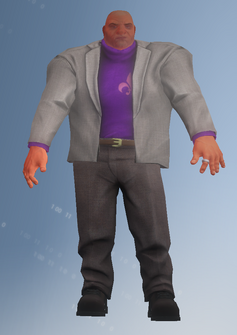 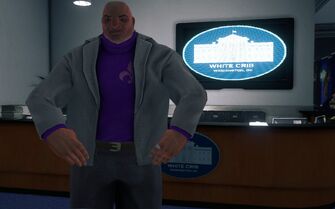 Oleg at the White Crib in Saints Row IV 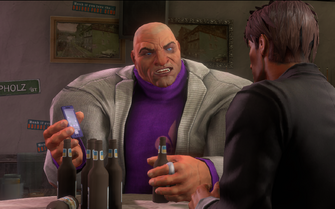 Oleg discussing Nyte Blayde with Josh Birk inside the Broken Shillelagh, moments before the Earth gets blown up in Saints Row IV 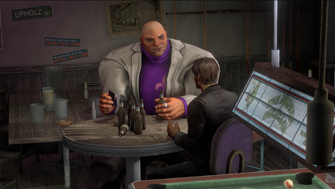 Oleg with Josh inside the Broken Shillelagh, moments before the Earth gets blown up in Saints Row IV 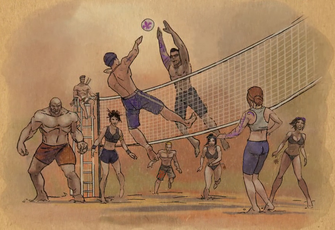 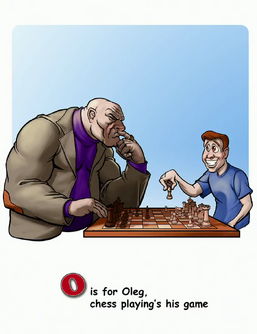 Oleg is featured under O in The ABCs of Saints Row

• Oleg Attacking The Player
Retrieved from "https://saintsrow.fandom.com/wiki/Oleg?oldid=426582"
Community content is available under CC-BY-SA unless otherwise noted.