King's obviously got somethin' goin' on with the police, I'll figure that shit out. In the meantime I want you two to go out and cause some havoc. If we can turn the public's eye to the Kings then the police won't have a choice but to come down on them.

— Dex to Johnny Gat and Playa, at Sloppy Seconds in Harrowgate.

Dex has a plan to force the police to put pressure on the Vice Kings, which involves Johnny Gat and Playa dressing as Vice Kings gang members and running riot in Stilwater, all while gaining the media's attention.[1]

After donning the Vice Kings' yellow colors, Playa and Johnny Gat drive downtown, where they kill shopkeepers, knock over giant bowling pins, and destroy The Pride of Stilwater. Dex's plan is successful, and the police are forced to apprehend some Vice Kings. Later that day, Benjamin King assures Richard Hughes that it was the 3rd Street Saints who were responsible. Warren Williams complains about King's friendship with City Hall and brandishes a GDHC .50, stating that it is firepower, and not politics, that gives them power. King, taken aback by Warren's disrespect, promptly tells him to "get the fuck outta [his] office".[2]

In order to pull the attention of the Police away from the Saints, Dex came up with the idea of having you dress in Vice Kings colors, and going to cause some destruction all around town. You really did a number on the city, all in the name of the Vice Kings. Hopefully, the media coverage will force the Police to turn their attention to the Kings and lay off the Saints.

Earn some police notoriety to get the media's attention.

Alright, if the Vice Kings are gonna take the fall we gotta make sure whatever we do is caught on tape.

The mission starts at Sloppy Seconds in Harrowgate, with the objective to gain two units of police Notoriety.

Unlike the previous mission[3], there is no penalty for killing fellow Saints, and it does not raise Notoriety. The 3rd Street Saints are not immediately hostile, but the reticle goes red when aiming at them regardless, and Johnny Gat has no problem with killing them.

Go to the retail District and start killing shopkeepers.

Let's get started. The first thing we're gonna do is torch a couple stores.

Once the Notoriety has been raised, drive to Nob Hill and kill the shopkeepers inside Shear Intensity and Impressions. At this point Notoriety is at level 3.

Head to the bowling pins downtown.

Whaddya say we head downtown and show 'em what we think of modern art?

Now drive towards the giant bowling pins marked on the map.

Knock those pins off the pedestal!

Let's hit that ramp and knock those pins out.

Get some speed and use the ramp to direct the car into the pins, knocking them all over and gaining 4 units of Notoriety in the process.

One more thing... let's find a bulldozer, there's something I'm just dyin' to do...

Get in the marked bulldozer. Johnny gets into a nearby Backhoe and follows, but stops being a Homie so he cannot be abandoned.

Get behind the statue of Alderman Hughes.
Knock that statue down!

I'm getting real sick of hearin' Hughes run his mouth. I think it's time to thank him for his gift to Stilwater.

Knock over The Pride of Stilwater, an Atlas-esque statue of Alderman Richard Hughes holding the Earth on his back. There is a Forgive and Forget on the way to the statue, and while it does work, it shouldn't need to be used. To destroy the statue, simply plow into it with the bulldozer; despite what the objective says, it is not necessary to get behind the statue beforehand.

The mission can be failed by getting smoked or busted, abandoning/killing Johnny Gat,[4][5] letting the media die,[6] or allowing the bulldozer to be destroyed.[7]

Jack Armstrong: "I'm Jack Armstrong in the newsroom. This just in from the news desk: Glenview Hills seems to be the target of gangland warfare today as elements from the hoodlum gang known as Vice Kings are rampaging through the district as we speak. Reports indicate that everything is fair game and nothing is safe; storefronts smashed and firebombed, vehicles being destroyed, pedestrian traffic getting caught up in the violence - do not, repeat, do not, enter this area until the police have had a chance to quell the uprising. Repeating: Glenview Hills is under attack by the Vice King [sic] gang. If you are there now and are hearing this report, take appropriate safety measures. We will have a live report from Flying Officer Mike McCabe with the Stilwater Police Department in our Eye-in-the-Sky Chopper 2 as soon as he can get airborne. And we will keep an eye on this developing story here in the newsroom. I'm Jack Armstrong."

Jack Armstrong: "I'm Jack Armstrong in the newsroom. We now have more details on the massive attacks in Glenview Hills today; as promised, Flying Officer Mike McCabe of the Stilwater Police Department is now in our Eye-in-the-Sky Chopper 2. What is the situation like now, officer Mike?"
Mike McCabe: "Chaos, Jack, pure chaos. I'm circling over Glenview Hills as we speak, and the sight of burned-out cars, smashed storefront windows, dead bodies waiting to be toe-tagged - although it's hard to tell the bodies from the mannequins yanked from the fashion stores, Jack - it's like a warzone. While I am privy to some information given to us at the station on a need-to-know basis, we still are not quite sure what the flashpoint was for the Vice Kings' rampage. Now we do know that the Glenview Hills area is somewhat back to normal as the cleanup begins, Jack."
Jack Armstrong: "Any word on when the shops will be back open for business, officer Mike?"
Mike McCabe: "Well, er... we're not sure, Jack. There's a lot of work to be done and shopkeepers and citizens alike here are keeping an eye out for any further activity as they sweep away the mess and try to get back to living their lives. In the Eye-in-the-Sky Chopper 2, this is Officer Mike McCabe. Jack."
Jack Armstrong: "Flying Officer Mike McCabe of the Stilwater Police Department over Glenview Hills. We'll bring you details on this story as they happen. In the newsroom, I'm Jack Armstrong."

Johnny Gat: "Dex, don't worry, I have a plan."
Dex: "Johnny, your idea of a plan is taking the biggest hammer you can find and smashing whatever's in your way."
Johnny Gat: "That sounds like a plan to me."
Dex: "Yeah, a shitty one, as your whack ass robo-leg clearly proves."
Johnny Gat: "Oh, fuck you."
Dex: "Next time you try that cowboy shit, you might not walk away at all."
Johnny Gat: "No, seriously, fuck you."
Dex: "Look, I worked out a plan that will hurt the Kings, and put minimum risk on you."
Johnny Gat: "How much murderin' do I get to do."
Dex: "None."
Johnny Gat: "Your plan blows."
Dex: "Hear me out, alright? King's obviously got somethin' goin' on with the police, I'll figure that shit out. In the meantime I want you two to go out and cause some havoc. If we can turn the public's eye to the Kings then the police won't have a choice but to come down on them."
Johnny Gat: "Okay, so we go and do some damage. How do the VKs get blamed?"
Dex: "Put these on."
Johnny Gat: "I'm yellow enough as it is, Dex."
Dex: "Just put the damn shirt on."
Johnny Gat: "Fine."
Gat turns to Playa
Johnny Gat: "Get dressed. We got a little peace to disturb."

Johnny Gat: "Alright, if the Vice Kings are gonna take the fall we gotta make sure whatever we do is caught on tape."
Johnny Gat: "Let's get started. The first thing we're gonna do is torch a couple stores."
Johnny Gat: "Whaddya say we head downtown and show 'em what we think of modern art?"
Johnny Gat: "Let's hit that ramp and knock those pins out."
Johnny Gat: "One more thing... let's find a bulldozer, there's something I'm just dyin' to do..."
Johnny Gat: "I'm getting real sick of hearin' Hughes run his mouth. I think it's time to thank him for his gift to Stilwater."

— Random comment when the news vans are not close enough

Johnny Gat: "Let's start out light. There's a bunch of newsstands downtown, go and tear those bastards apart."
Johnny Gat: "Not bad, time to step things up. Kick it to the shopping center and firebomb every mothafuckin' store they got."
Johnny Gat: "Alright, one more stop and you can come home. There's a new exibit outside the museum. How 'bout you roll over there and show 'em how much you appreciate modern art."


— Unused dialogue from a version of the mission where Johnny wasn't present.

That takes care of the cops... let's stop by forgive and forget before we give our last little present to the Vice Kings.

Benjamin King: "Don't worry about it. Look, if it was one of mine I'll take care of it, but I'm tellin' ya, I don't care what colors they were wearing, it was that crew from Saint's Row I was tellin' you about. No, I'm not makin' any excu-- I will. Tell your wife I said hello. Goodbye, Alderman."
Warren Williams: "Great, now we got yo' cracka ass friends trippin'. Like I said, fuckin' with City Hall is a waste of time."
Benjamin King: "Wrong. Workin' with them is what gives us power."
Warren Williams: "Yo, fuck that. This is what gives us power."
Benjamin King: "Get the fuck outta my office." 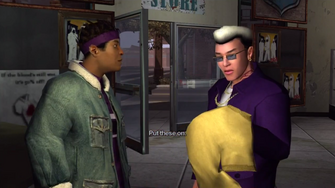 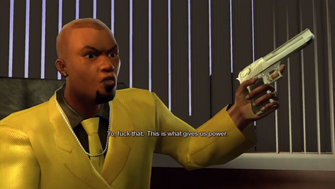 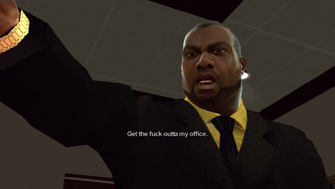 ...causing the latter to tell Warren to get out of his office 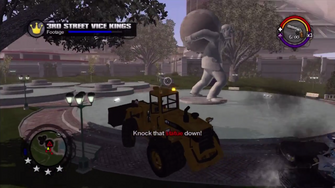 The statue of Alderman Richard Hughes 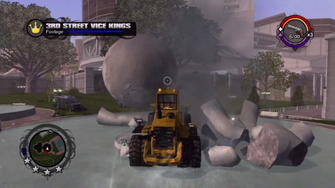 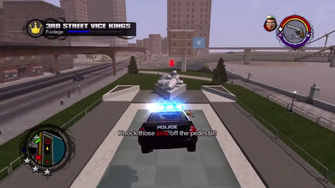 This article contains no references. See Help:Cite.
Retrieved from "https://saintsrow.fandom.com/wiki/3rd_Street_Vice_Kings?oldid=425185"
Community content is available under CC-BY-SA unless otherwise noted.